Pilot automation projects started here in 2016 and have been successfully launched into mass production at the beginning of 2017. It was a project of automatic TV packaging and after success on three production lines, it was realized also on others. The second project was focused on automatic testing of printed circuit boards – the result is two testing workplaces. For both projects, we have confirmed that they benefit our company, make the work easier for employees and save costs.
The success of these projects encouraged us, and in 2018 we implemented a partial automation of the package completion line, which contains instructions for use and TV accessories. Last year we also implemented a pilot line with a belt drive and a camera system to control the quality of TV installation.

Projects for 2019
In April, a project of innovative pallet packaging with ready-made TVs was launched. It significantly accelerated the packaging process as well as its quality. We have managed to reduce the cost of packaging pallets of finished TV pallets.
The second project is also in the field of TV packaging and focuses on the automatic folding of the cardboard box into which the TV is inserted. This project is planned to be implemented until the “high season” and its aim is also to make work easier and save costs.
The third, largest project, is already successfully done. It has automated the assembly and screwing of printed circuit boards and the assembly and screwing processes of the TV back cover. In this project it was necessary to adapt the production line itself. We started mass production in June with the same goal as in all automation projects – to make it easier for colleagues to work and save costs.
Another benefit of automation is that our company can offer our existing and potential customers an innovative production process which is cost-effective and with good quality, which significantly contributes to keep current customers and getting new contracts and business opportunities in the future. 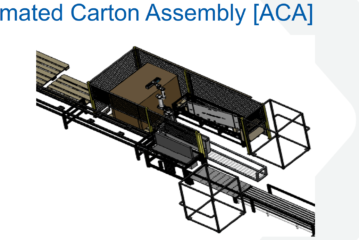 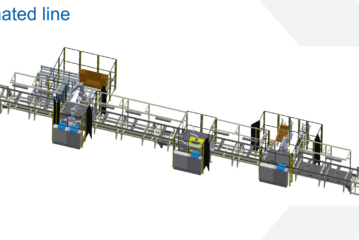