TREND: Electro-technical producers warn that there is no one to work

We do not have enough work staff or the hope that this will change. The most serious problem discussed by the representatives of the electro-technical companies at the Elkon 2017 conference was a huge labour shortage in the labour market and the policy of the government in recruiting the foreign workers.

„If the government does not help entrepreneurs in the labour force, then it is to consider whether it is appropriate to attract other foreign investments because it is unfair to other companies in Slovakia, including those investors who have already attracted them before,“ said Andrej Lasz, general secretary of The Association of Electro-technical Industry of the Slovak Republic, which organizes the conference. After the automotive industry, the electrical industry is the second strongest pillar of the Slovak economy.

The unemployed people did not come

The Association unites nearly 90 companies from the electro-technical industry. The largest of them, such as Foxconn, Osram, Siemens, BSH Drives and Pumps employ thousands of people. Several members have pointed out that the shortage of workers is acute and critical. „This is the problem we deal with today, and we will deal with tomorrow as well. We do not have time for the results of dual learning, we lack people now,“ emphasized Ľubomír Sommer, Financial Director of TV manufacturer of Foxconn in Nitra.

The company is the largest employer in the Nitra region and it would help relieve state policy in recruiting foreign workers. Ľ. Sommer rejects the arguments that employers should first draw from a large camp of the unemployed and then engage foreigners. „We have visited Labour Offices in many regions and more than eight hundred people without work have been invited to meetings for vacancies in the plant,“ he added. Foxconn offered a salary for the manufacturing operator along with bonuses high above the minimum wage, reduced the qualification requirements for these workers and offered training and organization of work on the line capable of incorporating even the inexperienced. The job was also offered in cooperation with temporary employment agencies, which provided workers with accommodation and transport from sites outside the Nitra region. „Nevertheless, only 19 people signed up,“ says Ľ. Sommer.

Companies assume that the unemployed people do not respond to the job for three reasons. Part of them does not have any work habits, and they do not care about getting to work regularly because it is an unimaginable way of life for them. Another large group is in the execution trap, and the official employment would mean withdrawing two-thirds of their old-age earnings. According to Martin Majer from the Ministry of Justice, the estimated number is about 60,000 people. Thirdly – people in “extreme poverty region” do not want to move for work because they can survive on social benefits, on growing plants and also minor gainful work in the grey area of the economy.

The situation, according to the companies can be dealt with the free flow of foreign workers here but this encountered resistance from the government. While neighbouring economies such as Poland or the Czech Republic have opened up a labour market for Ukrainian, Serbian, Vietnamese or Mongolian workers, employment in Slovakia is still an administrative torture. For example, a company must report an interest in employing a foreigner and then wait a month to see if the labour office does not find a job for a Slovak unemployed person. If the company finds one, but after a few days the worker stops working, the company must wait for another month again.

„Although the Ministry of Labour is preparing legislation that will allow this time to be shortened or totally eliminated, this change will not help the big employer unless the capacities of the Ministry of Interior and Foreign Affairs are strengthened,” remarks Michaela Sojaková, the Director of the Recruitment Agency HRQ group. Her agency received four hundred workers from Vietnam for companies from the automotive and electro-technical industry. The Slovak Embassy managed to handle 20 to 30 requests a week, while the departments of the Foreigners Police are swamped by a number of candidates who are starting to form a line at night or early in the morning. The police have three months to issue a residence permit in order to work. „We filed our first requests in April, and we received the decision to grant a residence permit for employment in late August,“ adds M. Sojáková.

Also, according to the experience of other entrepreneurs that TREND recorded in the past, the acquisition of a foreign worker in Slovakia takes four to eight months. Demand of large enterprises is counted in thousands of people. Volkswagen needs about a thousand foreigners; the PSA car manufacturer in Trnava has already been licensed to import 600 foreign workers. With the arrival of Jaguar Land Rover, the situation will only get worse. After the new legislation of the Ministry of Labour entering into force, embassies and the Foreigners Police will not keep up with the wave of applications. The representatives of the Ministry of Justice and the Economy who attended the event, answered the questions of the present entrepreneurs regarding the implemented and prepared measures of the ministries. Despite the invitation, the Ministry of Labour and the Education Department did not send any representatives to the event. Two-day conference Elkon 2017 took place in Bešeňová with attendance of approximately one hundred of participants. 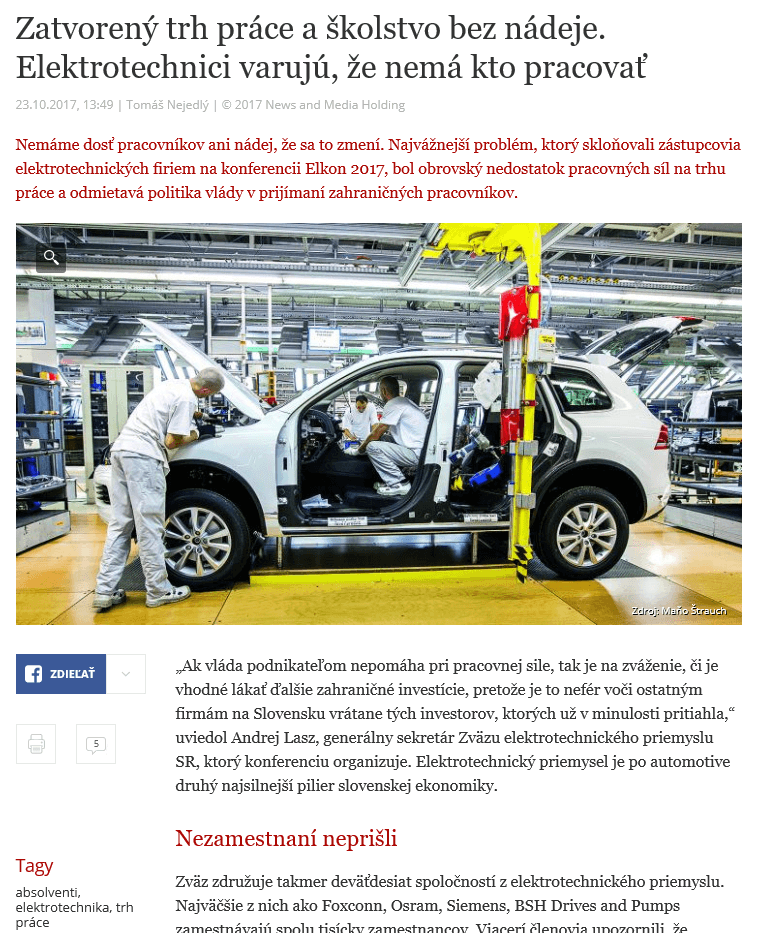